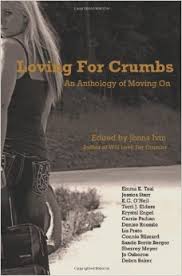 Contained within the pages of this anthology are fourteen true stories of inspiration, guts, and courage that will inspire anyone who has ever found themselves loving for crumbs. As Emma Kate Tsai says after she finds the strength to walk away from a relationship that nearly causes her to lose herself mentally and physically in The Spell of Starvation, “I spend my days writing, not about him. I can see the mirror from where I sit, and I smile at it, as if it’s an old friend I’ve called a truce with. I don’t need it to affirm my worth.”

Some of the stories are not so easily defined. Lines of infidelity are blurred in Liz Prato’s A New Place, as she writes, “That’s the problem with want – it refuses to distinguish between right and wrong. It prefers to hide behind the self-righteousness of some gray area it constructed for itself.”
And it is not always romantic relationships that cause us to give everything we have until we are drained dry. Sometimes it is our own families as Krystal Engel tells us in Delusions of Truth, “A mother loves her children no matter what they do and she only wants for them to be happy and not to struggle. Not mine.” Or as Sherrey Meyer points out in The Crumb Gatherer it is easy to repeat patterns within family relationships. “I’d managed to pick up a lot of mama’s controlling behaviors and was attempting to create my own crumb gatherers in my new family.”

From an affair with a married man in Jessica Starr’s December 21 to the exploitation of a desperate teenager in K.C. O’Neil’s Confessions of a Teenage Sex Toy these powerful stories will have you cheering for these women as they stop loving for crumbs and make the difficult and often painful decision to pick up and move on.